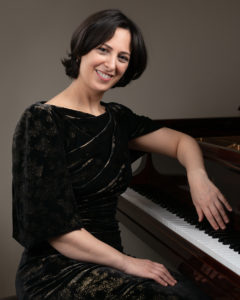 Renana was one of four young pianists selected by the renowned Leon Fleisher to participate in his workshop on Beethoven piano sonatas hosted by Carnegie Hall, where she presented performances of “Hammerklavier” and “Appassionata” to critical acclaim. Her recording of Chopin etudes op.25 will be released in 2019 by “The Chopin Project” – listen here.

A top prize winner at Los Angeles Liszt competition, International Keyboard Festival in New York, and Tel-Hai International Master Classes, she performed concerti such as Brahms 2nd, Rachmaninoff-Paganini Variations, and Beethoven’s “Emperor” with the Jerusalem Symphony, Haifa Symphony, Belgian “I Fiamminghi”, and Mannes College Orchestra. Her festival appearances included Marlboro and Ravinia, where she collaborated with prominent musicians like pianist Richard Goode, clarinetist Anthony McGill and members of the Guarneri string quartet, to name a few.

Renana premiered newly commissioned music by Paul Schoenfield, Tamar Muskal, Judith Zaimont, and other living composers. She is also dedicated to performing obscure pieces by Jewish composers who perished in the Holocaust; Erwin Schulhoff, Viktor Ullmann, and others.

She was a founder member of the award-winning piano trio “Terzetto” with violinist Diana Cohen and cellist Tanya Ell. The trio performed regularly in festivals and concerts across North America from 2007-2011.

A native of Israel, Renana started playing at the age of six, and soon after, garnered multiple awards and honors. She received scholarships from the America Israel Cultural Foundation, and the Jewish Foundation for the Education of Women. She completed her Bachelor and Master of Music degrees at Mannes College of Music, NY, where she studied with Richard Goode. In Israel, her teachers were pianists Natasha Tadson, Viktor Derevianko, and the Israeli composer Arie Shapira.

Renana became an American citizen in 2015 and makes her home in NYC, where she plays an active role in the NY Chapter of Music For Food, a musician-led initiative for local hunger relief. Away from the piano, Renana enjoys pursuing her passion for Argentine Tango, languages, and literature.