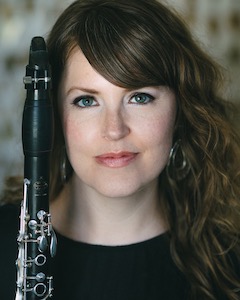 Clarinetist ​Rane Moore​ is well-regarded for her thoughtful, provocative interpretations of both standard and contemporary repertoire. Fiercely devoted to the new music communities of the East Coast and beyond, Moore is a founding member of the Talea Ensemble which regularly gives premieres of new works at major venues and festivals around the world. Ms. Moore has recently joined the Fischoff Gold Medal winning wind quintet, The City of Tomorrow, and is also a member of Boston’s Callithumpian Consort and Sound Icon. She is the principal clarinetist for the Boston Philharmonic and Boston Landmarks Orchestra. Moore is also a regularly invited collaborator with the International Contemporary Ensemble (ICE), Boston Musica Viva, Emmanuel Music, A Far Cry, Boston Modern Orchestra Project, and the Boston Ballet Orchestra.

In addition to her active performing schedule, Ms. Moore is on the faculty of the Summer Institute for Contemporary Performance Practice at New England Conservatory, Apple Hill Center for Chamber Music, at Harvard University’s Mather House and has served in the ensemble-in-residence and guest teacher for advanced students in composition and clarinet at many universities and conservatories around the world.

Ms. Moore is the co-artistic director of Winsor Music, a chamber music series and musical outreach organization in the Boston area. She has recordings on over a dozen labels including Tzadik, Pi, Wergo, Kairos and ECM records. Critics have praised her “enthralling,” “tour-de-force,” and “phenomenal” performances.

Teaching at Longy affords me the opportunity to nurture what is creative and unique in each student while developing the skill sets to realize their goals. I also aim to cultivate curiosity and encourage rigorous habits for lifelong learning – to develop independent musical voices backed with enough knowledge and variety of experience to tackle whatever opportunities present themselves.