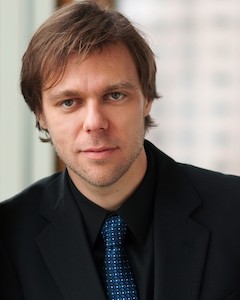 Grammy-nominated pianist Andrius Žlabys has received international acclaim for his appearances with many of the world’s leading orchestras, including The New York Philharmonic, Boston Symphony Orchestra, Cleveland Orchestra, and Rotterdamn Symphony. As a multifaceted musician of wide-ranging repertoire, Andrius Žlabys holds a special reverence for J.S. Bach, while remaining a strong advocate for the contemporary stage with numerous works commissioned by and written for him. He has performed at Longy on our Unique Voices series and in recital with violinist Gidon Kremer. Andrius is a winner of the 2000 Astral Artists National auditions.